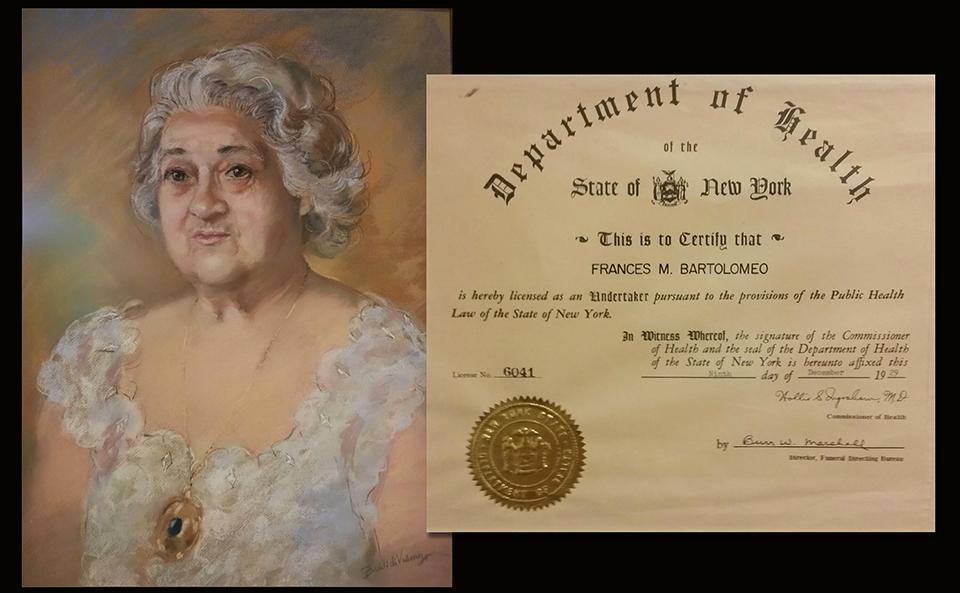 Let’s face it, the role of Funeral Director for many years has typically been assumed by men. Lately, maybe you’ve noticed that those faces are changing. More and more, women are emerging in this field, helping families through the strides of funeral care and planning.

Today, Bartolomeo & Perotto Funeral Home employs eight staff in direct funeral care. We are proud to say that three of these staff members are women, one is a licensed Funeral Director and two are serving a residency to become Funeral Directors. Though the tide has just recently turned, the history of women in funeral care is strong at Bartolomeo & Perotto Funeral Home. The present owners represent the Perotto subsidiary of the business name, but have you ever wondered where the name Bartolomeo came from?

In 1922 George and Frances Bartolomeo (beloved and esteemed uncle & aunt of the Perotto family) began the funeral care business. Though the criteria has changed through the years, back then you only needed a case of embalming fluid and the drive to provide funeral care to get a Funeral Director’s license in New York State. There also was no need for funeral facilities at the time, as calling hours were held in private homes. Most had no telephones, so the announcement of a family death got around primarily by word of mouth and it was common practice to hang wreaths on the front door of homes to signify that someone had passed and calling hours were taking place. In 1926 the need for a building to enhance visitations and unburden families became apparent. The couple moved forward and purchased property on Jay Street in Rochester and as business grew, so did the need for larger accommodations with eventual structures built on Lexington Avenue and presently on Vintage Lane.

Frances Bartolomeo (Aunt Frances) was an integral part of Bartolomeo Funeral Home (as it was known then) as it moved through time and the ranks of current funeral care practices and licensing. Though Uncle George’s networking role in the community was critical, Aunt Frances was the brains behind the business. In the beginning, she ultimately fulfilled all roles in funeral proceedings, including picking up community members who had passed (undertaking), embalming and funeral arranging, all while handling business transactions and pertinent record-keeping. Eventually she pared down her role, but still heavily influenced the decision-making as far as the business was concerned.

George and Frances never had time to have a family of their own, but Frances was fortunate to pass on her knowledge and expertise in funeral planning and how the funeral home was run to her nephews, Phil Perotto and Peter Giullari, who eventually took over the business. Phil Perotto shares, that until Aunt Frances’s death in 1983 she continued to mentor and play an important role in the direction of the business. She built the foundation for a very important need in the community, helping to create a livelihood that has been in the Rochester area for almost a century. Now that tradition continues with Frances’s great-nephews, Michael and David Perotto, who have taken the helm to drive this organization into the future, progressing to bring the best care that can be provided by today’s funeral care standards and where women will continue to be a part of that vision.

Link here for the history of women in funeral care:

Link here for Fortune’s overview on why your funeral will probably be run by a woman:

Link here for some intriguing women in today’s funeral care: