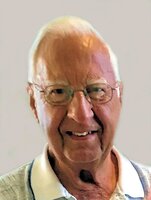 All services were held in private due to covid. A celebration of Jerry’s life will be held in the Summer of 2022.

Jerry was born in Brockport, New York on March 23, 1925.  He was the son of Walter and Mary Barton.  Jerry was the middle child. His brothers were Homer and Bernard Barton. Walter, his Dad, was

a hired man on a farm. The family was always moving for his father’s work. Jerry learned, at an early age, the value of hard work.  He had to take long walks to school in all kinds of weather. During high school Jerry played basketball and baseball. He was a graduate of Spencerport Central High School.

Jerry began his career hauling cans of milk to the dairy for processing, and later transitioned to a newer way to get the milk to the dairy by purchasing one of the first tanker trucks.  As his business grew he purchased a Heil tanker truck, which he had for many years.  Jerry took great pride in his truck, and kept it meticulously clean regardless of road conditions or the weather.  Jerry did this work 7 days a week for over 60 years. After Jerry retired, he remained involved with the milk hauling business and assisted his son Steven, who took over the business.  He continued to work on, or drive trucks when Steven owned and operated his car hauling company, Barton Transport.  Throughout his life, Jerry helped others and his family whenever he could.

Jerry met his wife, Betty Way, through his brother Homer who worked on Wayside Farms in Churchville, NY. Jerry and Betty married on April 3, 1948. They honeymooned in Florida.  Their first residence was an apartment in the home of Alfred and Jean Way on Dewey Street in Churchville, NY. In 1950 they purchased their first home at 2545 S. Union Street Spencerport, NY where they lived for 54 years. Later they moved to Amity Street in the Village of Spencerport. They had two children. Joyce, who was born on April 26, 1951 and Steven who was born on July 9, 1954.  He was the proud grandfather of six children and ten great grandchildren.  Jerry was a loyal and loving husband, father and grandfather.

Jerry had many interests he pursued and enjoyed throughout his life.  Jerry and Betty owned several different motorhomes in which they took trips to car races and traveled with other motorhome friends. They liked sprint car racing on dirt tracks. They also enjoyed NASCAR racing.

Jerry spent many happy times with friends and family playing cards. He enjoyed bowling in many leagues over the years. In later life he also golfed in a league.  Jerry was a formidable horseshoe and corn hole player who often beat his opponents. Jerry was the life of any party and enjoyed nothing better than a cold beer or a perfect manhattan.

Jerry was outgoing, gregarious and highly sociable. He remained spry and active his whole life. He loved people and people loved him.  Many consider him a legend as the hard working, fun loving and loyal man that he was.