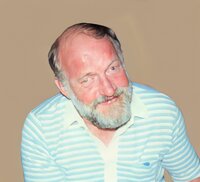 John was a graduate of Hornell High School and spent his early years in the Navy.  After his military career, he worked as a mechanical engineer at Xerox.  John and his wife, Dianne, retired early and enjoyed many years traveling the country together with their RV.  John enjoyed woodworking and golf, and he and Dianne never missed a carnival – you could always find them at the I Got It tent!  They loved casinos too, especially Seneca Niagara, where their children would often join them for weekends of fun.  They had their regular seats at all of the local weekly Bingo games, again often joined by their children and grandchildren. Family was most important to them, and huge family gatherings at the Albers house for Christmas were a much-anticipated tradition each year.

John's graveside service will be celebrated Tuesday, November 15 at 12 pm at White Haven Memorial Park in the Creation Chapel.