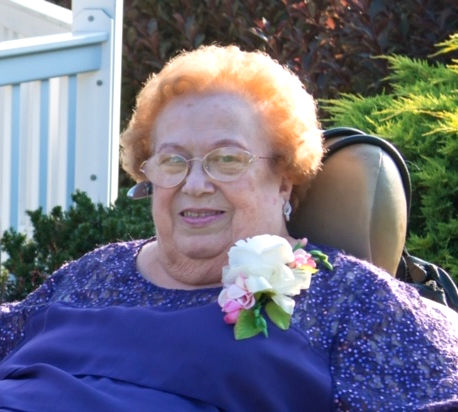 Elizabeth’s visitation will be Monday 1-4 pm followed by her funeral service at 4:00 pm at the funeral home, 21 South Main Street, Churchville, NY.

Elizabeth was born on September 6, 1931 to Harry and Hazelteen Pimm in Churchville, NY.  She was raised with her siblings, Frances, Harry Jr., Eleanor and Viola.  She graduated from Churchville High School. Elizabeth met the love of her live, Edward Lievense, in April 1949.  Their first date was Elizabeth’s Senior Prom. They were engaged shortly thereafter and married at their family home on October 8, 1949. Through their loving marriage, six children were produced:  Richard, Helen, Linda, Donald, Dale and Dianne. They blessed later in life with 8 grandchildren and then 12 great-grandchildren. Elizabeth and Edward were married for 67 years.

Elizabeth enjoyed crocheting, creating from scratch a 3’ x 5’ scene of the Last Supper, and over 13 full-size tablecloths, which have been treasured by all who have received them.  She was a seamstress, making many outfits for herself and her family.  Baker, pies being her favorite dessert to make.  Reader, enjoying steamy romance novels.

Edward and Elizabeth enjoyed wintering in Fairhope, Alabama for 20 years until 2010, when they could no longer travel out of state for long stretches of time due to changes in their Health Insurance rules.  They enjoyed road trips and during their marriage, they visited 23 states and Canada.

Edward and Elizabeth square danced weekly at First Congregational Church of Riga, until Edward broke his hip in 1987 and he could no longer physically perform the steps.

She enjoyed helping her youngest daughter run her candy business in the ‘80’s and her youngest son run his lawn mowing business.  Elizabeth became an adept chocolatier and had her hands in helping keep track of the accounting for both businesses.  She had an affinity for numbers, as was shown by her high school bookkeeping final, where she had managed to get a perfect score.

In her later years, Elizabeth became extremely hard of hearing, but would still enjoy watching her puzzle games, “Wheel of Fortune” and “Jeopardy”, and the “Young and the Restless”.  She loved having a Thomas Kinkade jigsaw puzzle to put together on the dining room table, as it was something that the entire family could do with her when they visited.

Elizabeth was a loving wife, mother, grandmother, sister and friend to many. She will be deeply missed and always fondly remembered by her family and everyone who knew her.

Share Your Memory of
Elizabeth
Upload Your Memory View All Memories
Be the first to upload a memory!