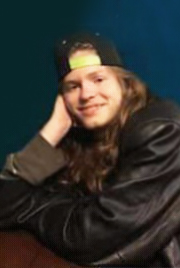 Dakota's life story will be shared during his visitation, Wednesday, June 3rd, 3-7 PM at the funeral home, 15 West Ave., Spencerport. His funeral service will be live streamed Thursday, June 4th at 10AM . His burial in Holy Sepulchre Cemetery will be private.

Dakota's family is requiring anyone who is coming to his visitaion to be wearing a mask. Immediately entering the building it is also required that all guest properly hand sanitize. Thank you.

Dakota Podlaski was born in Rochester, NY on January 28, 2000. His parents Veronica & Robert raised Dakota and their 3 other children, Kalie, Brandon & Tyler in Rochester.

At an early age Dakota declared that when he grew up, he wanted to be a police officer. Anytime he saw an officer or police cruiser he wanted to go and “help” out his fellow officers. It was these early years that he also grew to love Halloween.

His love of music began, he played the flugelhorn, electric guitar and was a member of Step. His musical interest included the likes of country, heavy metal and rap. His very first concert was that of Garth Brooks.

When Dakota was not listening to music, he enjoyed, fishing in Lake Ontario, Charlotte Pier and in Summerville. He had a fascination for abandoned buildings. He and friends at night would grab a flashlight & video camera to go exploring old abandoned buildings. His parents were always concerned about him getting hurt, but there was no stopping him. He believed in paranormal activity and he was always searching for the beyond with video camera in hand.

His childhood passions, of becoming policemen and Halloween followed him into his teen years. He was a member of the Police Explorer’s & his FB page always had a countdown to Halloween. He began working as an actor for Nightmare Manor. Recently, he had an acting roll in Willowvale Harbor.

He had an affinity just like his dad Robert for the Patriot Guard. He joined their effort and served in his first mission at the age of 13.

Dakota’s energetic, social, love of kids, unpredictable nature, sarcastic whit, strong will and love of exploring will be missed by family and friends.