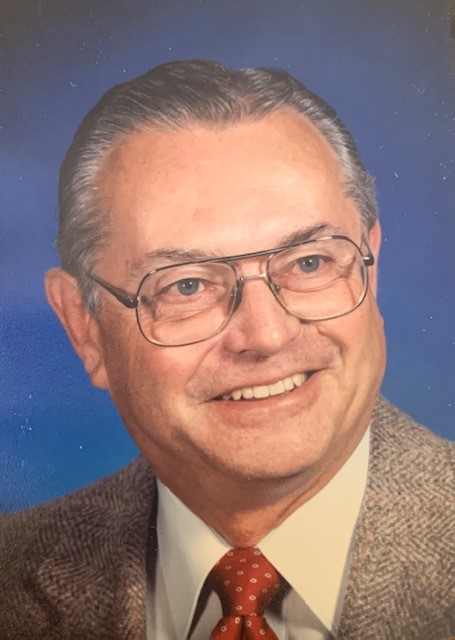 Gaylord James Ribby, 92 passed away after a brief illness on July 30, 2020. He was a resident of the Legacy in Greece, New York and previously lived with his wife Jane, and his family in Churchville for 29 years where he was a member of the St. Vincent de Paul Catholic Church.

He was born February 26, 1928 to Dr. Eugene G. Ribby and Carolyn Goodell Ribby in Batavia, New York. He grew up in Byron Bergen where he was a standout athlete in baseball and basketball at Byron Bergen High School. He enlisted and served in the U.S. Army.

He was a graduate of the University of Michigan and Springfield College. He and his wife of 60 years, Jane Feary Ribby, raised their five children in Batavia, New York. He was a member of St. Joseph Catholic Church and was an active and avid supporter of the Batavia Muck Dogs, Trojans and Pirates. His father, Dr. Eugene Ribby was the first team doctor and one of the founders of the first Batavia Pony team, He was a devoted sports fan and golfer throughout his life. Even in his 90’s he enjoyed watching his grandchildren excel at Lacrosse, soccer, cheer, football, basketball and baseball, attending games whether in rain or shine.

He was the Assistant Principal, teacher and coach at Alexander High School in New York for 30 years. He left a lasting legacy at AHS winning many championship seasons for the football, basketball and track teams. He also taught summer school history at Batavia High School for several years. After he retired from the New York School District, he taught for 5 years at Holy Family elementary school in Rochester, New York. Upon retirement, the Ribby’s traveled extensively throughout the U.S. and Europe.

He was preceded in death by his wife of 60 years, Jane Feary Ribby, his son Matthew Ribby, and parents Carolyn Ribby Gorton and Dr. Eugene Ribby.

As per New York State rules please wear a mask for visitation at the funeral home and the Funeral Mass at St. John the Evangelist Church.

Gaylord’s visitation will be held from 3:00-7:00 pm on Monday, August 10th at the funeral home, 15 West Ave. Spencerport. Click here to reserve your visitation time with Gaylord's family

His Funeral Mass will be celebrated 10:00 am on Tuesday, August 11th at St. John the Evangelist Church 55 Martha Street, Spencerport. Interment in Creekside Cemetery.

A celebration of life will be held in 2021 for family and friends who are unable to travel due to the pandemic.