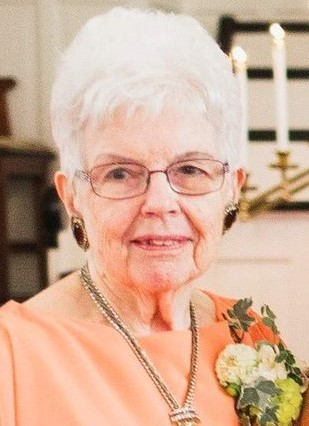 Virginia Ann (Dickey) Wolfe, 91, passed away peacefully at The Maplewood, Webster, NY on January 9, 2021 .  Born to Clyde E. and Flossie M. (Dawley) Dickey on July 6, 1929, Ann grew up an only child in the Village of Arcade, New York.  Her adoring parents and Aunt Velvah Dawley enjoyed attending Ann’s concerts at Arcade Central School where she played first clarinet.  When she wasn’t playing with paper dolls or going to the picture show, she also played at many a piano recital.  After high school Ann left Arcade for a few years to attend Rochester Business Institute where she studied to become a Medical Secretary.

While living in Rochester, she met her husband to be at the roller rink where they both loved to skate.  Ann worked for several years as a medical secretary at Wyoming Central Community Hospital and Rochester General Hospital.  Ann was married to Roscoe C. (Tex) Wolfe on March 5, 1955 at the First Congregational Church in Arcade NY.  After living in Arcade for several years where Ann was an active member of the Order of the Eastern Star and homemaker – Ann and Tex moved their young family to Spencerport, NY in 1966.  Upon arriving in Spencerport, Ann was a stay-at-home mom, active member of Spencerport First Congregation Church as a deaconess and Sunday school teacher, Girl Scout Leader’s Aid, and Volunteer Teaching Aid in the Spencerport School District.  In 1979 Ann started working at the Town of Ogden, and in 1980, Ann was elected as Town Clerk and Receiver of Taxes for the Town of Ogden, she very much enjoyed her work and remained Town Clerk until she retired in 2003.  Until 2019, Ann was proud to annually attend her Arcade Central High School Class of 1947 Reunion, in recent years held at The Glen Iris Inn at Letchworth State Park.

Share Your Memory of
Virginia
Upload Your Memory View All Memories
Be the first to upload a memory!
Share A Memory
Send Flowers