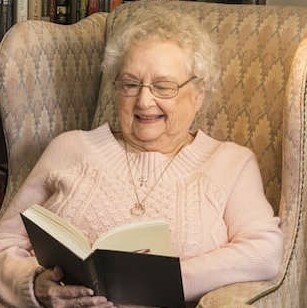 In lieu of flowers donations may be sent to the Humane Society at Lollypop Farm, 99 Victor Rd. Fairport, NY 14450 in Janice's memory.

Janice was born on March 18, 1930, in Colton, NY. She was born in the front parlor of her parent’s home. Her father was Roy (Leroy) Jasper Gotham & her mother was Eva Mae Sevey, and later, her stepmom Alice. Colton is on the edge of the Adirondacks, along the Raquette River.  Her maternal grandfather was George; maternal grandmother was Madelyn Victoria (Preston); Aunt Bertha, who was first married to William Rodwell, who died, and then she married his brother, George Rodwell. Aunt Bertha had two children, Ruth, who married Francis Thomas, and Algie, who married Alice Hutchinson. Uncle Linton Sevey was killed October 11, 1918, serving as a US soldier in World War I. Her dad’s family was grandfather Fred Herbert & grandmother, Mary Luella Thurston. Grandfather Fred was one of eleven brothers & sisters. So, you can see there are a few Gotham’s wandering around the Country. Janice’s mother, Eva, died March 16, 1935, and was buried March 18, 1935, which was Janice’s 5th birthday. Janice was being taken care of by a local couple, Homer & Lorena (Bullis) Reed. They lived on the Bullis farm, on the edge of town. Mrs. Bullis’ brother, Buster, was the local milkman in town. Dad would help him cut ice out of the river in the winter to put in the icehouse for keeping the milk cold during the summer months. Mrs. Lorena (Bullis) Reed was a teacher in the local school, so she took Janice to school with her. Janice started school in the fall of 1934, when she was only 4 years old.

Roy hired a number of housekeepers, but none seemed to stay very long, until Alice O’Brien, whom Roy ultimately married in March of 1939. There was a son born out of this marriage, named Lowell Herbert, and an adopted daughter, Jane Ann (Macloyd). Lowell was married to Marie Sevey and had a son, Robin, and a daughter, Dawn. He and Marie divorced, and he married Sue George. Jane married Carl Miller and had a daughter Michelle, and a son Kevin.  We have a copy of the Gotham family genealogy, if anyone is interested in going deeper into the family history.

Janice had a simple, fun childhood. Summers were spent playing with neighborhood kids, swimming in the Raquette River, roaming the hills and woods behind the home, picking wild berries, fishing, and baseball. Janice’s best friends were Laurene (Dusty) Hawley, Eileen Seaver, and a girlfriend from Pocantico Hills, NY, who spent summers with her. In winter, Janice, her siblings, and her friends, ice skated, went sled riding, skied, and played cards. They had fun making homemade fudge & popcorn on Saturday nights. Late winter and early spring was maple sugaring time. Uncle Harold had a big sugar bush where they would visit on Sundays and help gather the sap. They would boil eggs in the boiling sap, make jello, and put the bowls out in the snow to set up and put gobs of real whipped cream on it. They would gather snow in large pans and would have “wax on snow”, which is boiled maple syrup, drizzled on the snow. They would eat dill pickles in between, so that would take the sweetness away and they could eat more of the sweet sticky syrup.

On Sundays after church, they would take long walks, and sometimes were lucky enough to take a Sunday ride in Dad’s truck, where the kids would ride in the back. One real fun trip was to ride up to Catamount Mountain, climb up and talk with the Ranger at the top of the mountain, in the Ranger's tower. They would climb to the top of the tower, where they could see for miles.

The local school burned to the ground in April 1943. They returned to school the following Monday or Tuesday, after the fire. Elementary school was held in a large house in town and the high school was housed in the town hall. Band rehearsals were held in the recreational room on the lower level of the library. Janice took part in many grade school operettas for Christmas & graduation. She had the lead in the senior play. Janice was part of the marching band, playing clarinet and sax. She was also a cheerleader. She was active in the Methodist Church (Sunday school, Choir, youth groups, Christmas plays, and summer camp).

Janice graduated in June 1947 and graduation exercises took place on the lawn of the library. She went to Ogdensburg Business School, starting in July 1947 and she finished in March 1948, when she got a secretarial job in the business office of Clarkson College. Janice was fifth in line; her siblings were Barbara Eudora (Christy), born September 27, 1921; Ola Mae (McCarthy), born December 22, 1924; Linton Sevey, born May 16, 1923 & Wendell Roy, born January 12, 1924.

She met the love of her life, William “Bill” Hicks on a blind date, on January 29, 1949, at a Clarkson College hockey game. They married on September 10, 1949, at her home church. Following a honeymoon bus trip to Montreal, Canada, they settled into an apartment in Potsdam. Janice continued working at Clarkson, and Bill started his junior year at Clarkson, graduating in May 1951, with a degree in Manufacturing Engineering. Bill took a job with General Electric, on their test program. Their first stop was in Johnson City, New York. They found a studio apartment in Binghamton for $15 a week. Mid- September, they were on the move to the next job sight in Lynn, Mass. Another studio apartment in an old New England home. They truly enjoyed their time there. Bill was working on jet engines, and Janice loved the New England countryside. Their first Thanksgiving away from family consisted of a large roasted turkey leg! Mid December, 1951, was the next move, heading to Brockport, NY, with a stop over in Bridgeport, Conn. They  stayed with Janice’s sister in Medina, and Bill commuted every day. During this time, Janice’s sister Barb,  gave her driving lessons and she earned her license. In March 1951, they headed for Syracuse's Electronic Park, which was Bill’s last assignment. In June 1951, they returned to Brockport, where Bill took a permanent assignment. They moved into an apartment in Brockport. In September 1951, Janice got a job working at the State Teachers College, where she worked until March. On August 3, 1953, their first son, Gary William, was born. They started looking for a house and moved into a new home on Parkhurst Drive in Spencerport. Janice’s family includes: Gary (Dawn), daughter, Shannon; David (Jeannette) son, David Jr. (partner Peter); Lisa (Tim) sons, Matthew (Lindsey) 4 children, Drew (Catherine), Daniel; Carol, daughter, Canadice (Dan) 4 children; 6 grandchildren; 11 great grandchildren; 2 great great grandchildren.

On their 20th anniversary in 1969, Janice and Bill traveled to Barbados. They took a trip out west in the late 1970’s with Lisa and Carol. Janice and Bill took multiple trips to various places in Europe and around the world. Holidays were spent with family and friends. Janice enjoyed bowling, square dancing and playing cards with friends. She was the church secretary at Spencerport United Methodist Church,and sang in the choir. She also played the clarinet with the New Horizon Band. She was a fan of the Buffalo Bills, enjoyed listening to Alan Jackson, loved watching soap operas and “Dancing with the Stars”. Her favorite sayings were “Jesus, Mary & Joseph” and “Whatever”. Janice had an amazing memory. She was the family Historian, social planner and loved cooking for her family. Her family was everything to her.