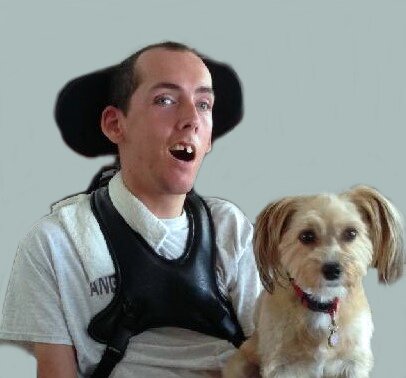 Please share a memory of Raymond to include in a keepsake book for family and friends.
View Tribute Book

Ray passed away while in the loving arms of his family, with his beloved service dog by his side after a brief illness. Ray is survived by his parents Raymond and Frances Lissow, his sisters Amelia (Nick) Bakolas, Rachel Keith and his brother John Lissow.  Also left to mourn are his Aunts and Uncles Barbara Beach, Cathy and Stu MacDonald, William Lissow, John and Leslie Strong, Dan and Kathy Strong, Caleb and Margaret Strong, Hanna and Jon Baker,  his nieces Evelyn and Grace Keith and Gianna Bakolas, his nephew Jace Bakolas and countless cousins and friends.  He is also survived by his personal care aide of 10 years, Dolly and his service dog, Buddy. Waiting to greet him at Heaven's gate are his grandparents-Raymond and Ruth Lissow and Malcolm and Ann Strong.

Ray's life story will be shared during his visitation at the funeral home, Sunday, August 21st, 1-4 pm, with a memorial service at 3:30 pm, 15 West Avenue, Spencerport. In lieu of flowers, donations may be sent to Red Apple, 6640 Kentucky Ave., New Port Richey, FL 34653 in Ray's memory.

Born with cerebral palsy, Ray was still able to live a remarkable life.  A proud graduate of Albion Central School '06, Ray so loved his various teachers, classmates and most especially his one-on-one aide throughout his entire school life, Dawn Bower. After graduation Ray spent many happy days at the ARC workshop, and volunteering in the community.  He helped Dad often with various Rotary projects and was awarded a Paul Harris Fellow for all his hard work and sunny disposition in spite of his physical limitations.

Ray was introduced to boating as an infant, and like his Dad was happiest on or around water.  He was able to boat for many years all around Lake Ontario every summer with his family, traveling throughout the Thousand islands, Canada and points west.  In 2008 he embarked on the journey of a lifetime with his parents, traveling through the Great lakes, down the Mississippi River to the Gulf of Mexico on the boat that his Dad modified just for him, "Winstar".

Ray enjoyed life in Florida, especially visiting with neighbors and attending The Red Apple ADT where he also had so many friends.  He was able to participate in an annual fishing derby designed for young adults with physical limitations. He looked forward every Tuesday to "Boys night out", which involved going out to eat with Dad, Uncle Bill, and whoever was able to join them.

Most recently he enjoyed being entertained by and playing with his niece and nephew Gianna and Jace.  He loved holding them as babies and then as they grew pulling them in a wagon with his wheelchair.  We will miss watching Jace give him fist bumps and Gianna playing slime with him. He loved them so and they brought such joy to his life!

Anyone who knew Ray recognized what a social butterfly he was.  He was happiest when in the company of his Dad, with his dog Buddy on his wheelchair tray.  He loved morning coffee with Dad and Uncle Bill, going to Home Depot, or just helping Dad with various projects.  He truly was his Dads best friend.

We will miss Ray tremendously, but we know he is now reunited with his grandparents and running free!!

Share Your Memory of
Raymond
Upload Your Memory View All Memories
Be the first to upload a memory!
Share A Memory
Send Flowers